The official 163rd year of the Bayfield Agricultural Society was celebrated at its AGM on Friday November 22. It began with a potluck meal with as usual endless choices of desserts. It seems that the Society is famous for sharing and consuming desserts.

The Ontario Association of Agricultural Society (OAAS) Awards were presented by its President, Doug Yeo. The OAAS Meritorious Award was presented to Carol Penhale for the endless positions she has held in the organization, including President and Secretary, and the work she has done over the years, especially her long position with running the food booth. She continues to be a promoter of the Society when she is at other events.

Three OAAS Accomplishment Awards were then presented. The first one was given to the Bayfield Lions Club. This organization has had a long history together. The Lions used to rent the grounds and use it as a park and eventually a sports park. The group has been a regular supporter of entertainment and ensuring a band was in the parade.

The second Accomplishment Award was presented to Don Brodie. Don has been a member for well over twenty years and in that time served on the Board and became President and chairing several committees. He assisted with the organization of having the RCMP Musical Ride coming into the areas.

The final Accomplishment Award will be presented to Charlie Kalbfleisch. Charlie is a stalwart advocate for the Bayfield Fair. He has ensured the Seaforth Marching Band is always at the parade. He took over the Youth Talent Show now called the Rise2Fame competition and is a definite supporter of the arts in this community and ensures young talent have a stage to present their skills.

In the AGM two Honorary Memberships were announced –one to Don Brodie and the other to Henry Baker. Both men served many years on the Board and both guided the organization as Presidents.

Bill Ferguson gave an informative talk on bees and the current challenges beekeeping is facing. If you have questions, he would genuinely provide you with answers. The AGM acknowledged the major accomplishment of completing the Animal Display Building in a report that was presented. The new Board appointed Lorraine Shields as President, Pamela Stanley as 1st Vice President, Vicki Culbert as 2nd Vice President with Jentje Steenbeek filling in as Past President. Jean Dunn will continues as Homecraft President. The remainder of the Board is Gayle Beuermann, Don Brodie, Ted Dunn, Courtney Lang, Doreen MacKenzie, and Doug Yeo. Many people stepped forward to ensure the Board had strong governance skills as well as areas needing specific expertise.

During the evening everyone was introduced to Renee Hill who was appointed at the Society’s Secretary. Her previous roles as a corporate secretary for the law firm of Appleby, Bermuda; Crown Counsel in BC; and for the law firm of Paul Johnston & Co. ensured she would get to know our membership quickly and be a good link with our District and Provincial Office.

Two positions are still open –a chair for the Friends of the Fair and a chair for the Youth Section. Both committees have committee members and the Youth group will be meeting in two weeks. If you are interested in taking a role in the Society, email info@bayfieldfair.ca and someone will contact you. For those who want to make a difference in helping decide the direction of the organization, positions as a Director are still available. The organization wants to grow that part of the organization so it positions itself heading into the future. People with a background in farming, police work, and local retail would be major additions to the Board.

For a sneak preview of the 2020 fair two new features that will likely be seen are: a zone Arabian Show on the Sunday and an archery demonstration which includes participation. As you can tell a lot of the planning is already underway for 2020’s Blossoms, Butterflies & Bees and much of it confirmed. 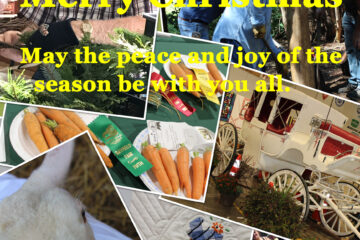 The Bayfield Agricultural Society wishes everyone in the community a very Merry Christmas and a Happy New Year! Without the kind support of sponsors and community volunteers, the 2022 Bayfield Fair wouldn’t have been the Read more…

An Old Time Jamboree will be held during the Bayfield Fair on Sunday, August 21, from 1 p.m. to 5 p.m. upstairs in the arena. Participants can listen and dance to old favourites. The Jamboree Read more…