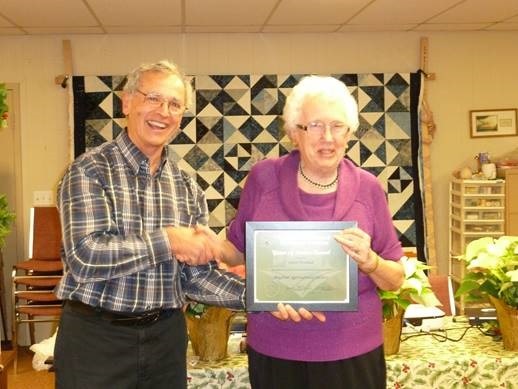 Carol Penhale being presented with her 55 year of service certificate.

A Certificate of Achievement is presented to someone or an organization which has contributed to the Society over an extended period of time and Libro Credit Union was the recipient.  The Libro Credit Union has fully supported the funding of the 4-H programs at the fair and ensures a staff member attends to hand out ribbons for the sheep and dairy shows. 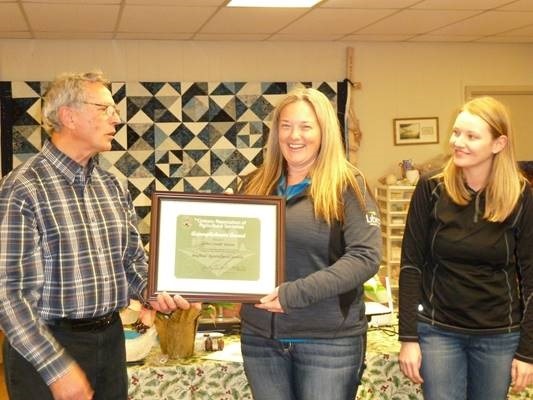 The Certificate of Achievement being presented to Libro Credit Union.

The final award was the Meritorious Award which is only given out rarely.  It is for most worthy support of the Society over a long period of time and Ted and Jean Dunn received this award.  The two have a combined total of over 100 years of service to the Society and have exhibited leadership over most of those years. 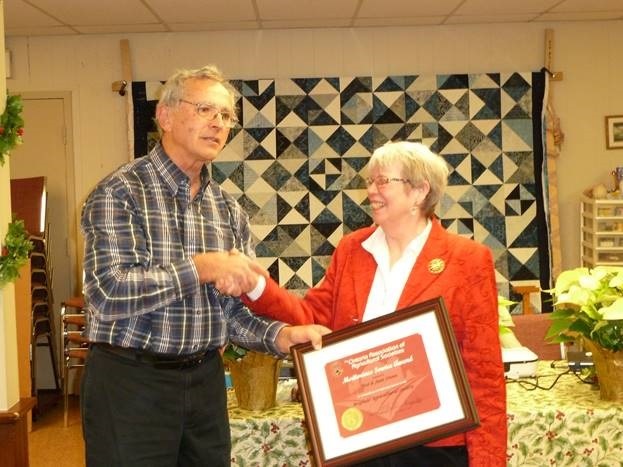 The Meritorious Award being presented to Jean Dunn (Ted Dunn was absent for the presentation.)

The Ag Society is so blessed to have them as exemplary members.

David Pullen was the speaker for the AGM and talked about the history of forestry in Huron County.  He, through a series of pictures, talked about sections in the County which were being blown away because of the lack of tree cover.  He reminded everyone that crops grown beside a line of trees do exceptionally well a couple of rows from the trees because of the shelter and benefit the trees provide.  The tree planting currently is only matching the level of trees being cut down within the County.  He mentioned that the next species of tree which might be in danger is the beech.  It is such a loss to have lost the butternut, the elm, and the ash.

At the Annual Meeting greetings were provided by John McPhee on behalf of Lisa Thompson, and Bart Scherpenzeel and Bev Jantzi for District 8 of the Ontario Association of Agricultural Societies.  The new potential building project was described by Stephen Jacob.  The past year witnessed a fair with a larger than normal attendance and a greater number of exhibits and exhibitors.  A second Breakfast on the Farm was enjoyed by everyone and was a great educational event.  The organization adopted its first formal logo to identify itself.  The incoming executive will be: President –Jentje Steenbeek, 1st Vice President –Stephen Jacob, 2nd Vice President –Lorraine Shields, and Past President –Doug Yeo.  Susan Lehnen will continue as Secretary and Jim Erwin as Treasurer.

There were several people who attended the event for the first time as well as many who annually come.  There is always room for new people who would like to share their skills with an organization which organizes the annual fair –a community festival of sorts.  It also connects with other organizations in the village and has developed a Breakfast on the Farm event.  Its mandate is to give greater insight about agriculture.  We all are connected with agriculture whether we are a producer, an agri-food industry worker, or consumer.  All of us are part of the story and an Agricultural Society welcomes everyone no matter how they are connected.  We can be contacted at info@bayfieldfair.ca. 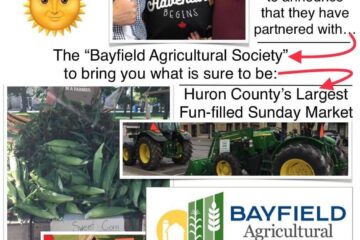 The Bayfield Agricultural Society wishes to share the exciting news that it will be partnering with Kevin Morrison and Pat Foster in holding a Sunday Market in Agricultural Park starting May 22, 2022. This market Read more… 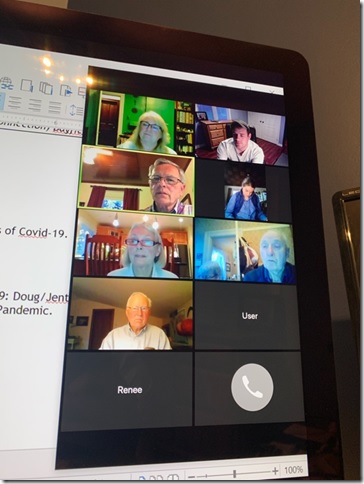 An Alternative Bayfield Fair Is In the Planning Stages

Several of the Bayfield Agricultural Society’s Directors met on the fairgrounds to finalize the planning for the 2020 fair.  No one could have predicted that our group would be learning how to videotape, have timelines Read more…

The Bayfield Ag Society met as usual last week but through a more common method these days by electronic means. It was great to see everyone comfortably in their homes dealing with the business on Read more…